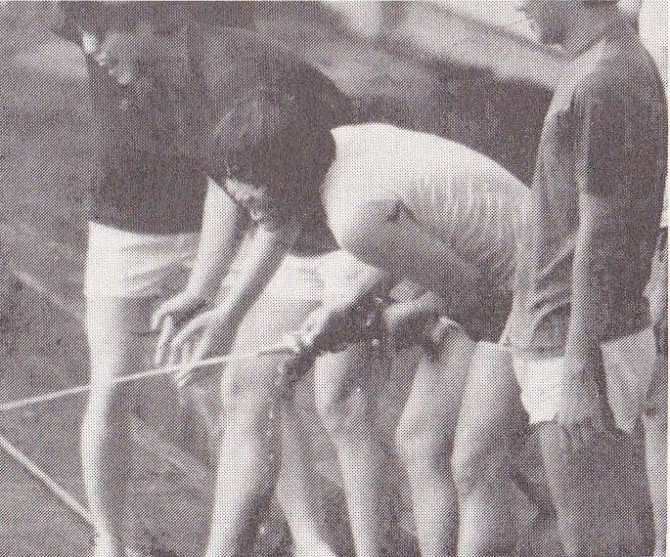 The dawn was ominous and foreboding. I was reluctant to wake. I wanted to wish the day away, rewind time or leapfrog to tomorrow. I prayed desperately for an escape. I was turning 21, a day of celebration for most, but alas I was in Raffles Hall. I was doomed.

I resigned to whatever that would befall me. Like an inmate in death row, I just hoped for a last minute reprieve, which never came unless you are in Hollywood. I could already visualize them sniggering and hear their taunts, “Hope-lah” and laughter.

I acted as normally through the day as on any normal day. I did not stick out. I did nothing out of the ordinary. I was wading below radar. I hoped they had forgotten about the day or about me. All seemed to go pretty well, no well wishes throughout the day, no mischievous eyes or grins greeted me. No one noticed me. I had survived the day, or so I thought.

I morphed into a Martian and locked myself in my room early, immediately after dinner. I needed to study for a test the following day. Hey, I was a senior in the midst of orientation. I needed no permission to retreat back to my room.

A few more hours and I would be saved. I switched off the lights. I was relieved. I went to bed early. I was undetected. I managed to escape. They had forgotten about me. I waded below their deathly attention. So far so good and it was turning into a good night indeed. Suckers, I smiled.

Shit. There were shadows outside my room. The corridors suddenly went quiet. Other creatures of the night too were unusually quiet. The night had gone too quiet. Something was amiss. Shit. I could vaguely hear their soft shuffling footfalls. Shit. They were gathering in numbers. Shit. Their hushed murmurings were deafeningly loud. My heart thundered into my throat. I knew I was doomed.

As one, they thundered in reply, “Oh, why were you born so beautiful. Oh, why were you born at all. You’re no bloody good to anyone. You’re no bloody good at all. Get lost you bum. Get lost you useless bum”. They were laughing wickedly however without malevolence. Normal friends would be singing “Happy birthday”, and obviously they were not normal. They were just best of friends.

They knew they had their prey cornered, trapped. They courteously suggested that I surrender myself to them. They knew I was in my room. They had eyes on me all day. Detecting my reluctance, they persuaded by shoving the water hose into my room to wake me up from my deep slumber and flood my room if I still refused to open my door. Well, a friend in need has many friends indeed.

Resigned and reluctantly, I opened my door. More than two dozens of grinning faces and sweaty bodies crowded at the doorway. I tried to protest my way out of the predicament but my voice was lost in the cacophony of their inattention. I was being escorted as a lamb to slaughter, more like facing an execution by firing squad. I pretended to weaken my stride but to no avail, their arms were just as ready and willing to support me. Be brave and of good courage, they encouraged. Take it like a man.

We trudged on the pathway to the execution ground. “Swing low, sweet chariot. Come now and take me away”, I implored to the silent heaven, as I took step by each agonizing step towards my impending fate. Heaven was indeed very silent, and the chariot was probably in the smithy that night. My head was hung in resignation. No divine intervention for the night.

Many peered from their windows and corridors at the condemned in the midst of the gaily procession. They knew the vile intention of the procession and the fate of the condemned, poor fellow. Some muted whisperings, some fingers pointing, and some heads nodding sympathetically. A handful who knew mouthed “Happy birthday”, giggled and blew kisses.

They ceremoniously laid me into the drain between RH5 & 6, downstream. I did not even feebly resist. I just stepped into the drain and lie down. I was so dazed, so much so that I did not even hear their laughter nor felt the cold water coursing around my body. It was so surreal. I closed my eyes, held my breath and waited.

They were busy mustering the requisite 21 gunners, exactly 21 guns, no more and no less. They verified their age, only those guns older than 21 were selected and given the honour. It’s best left to your own imaginations how they verify the age of the guns. They arrayed their legs across the drain with guns sighted downward between their legs aimed downstream. They awaited the order. I was hardly breathing awaiting my fate downstream.

“Make ready. Take Aim. Fire”, echo-ed into the silent night, and they fired as one. RH infamous 21-gun salute blasted, rather silently, to celebrate my 21st birthday. I was jolted from the dark reverie, first by the ammonia smell, followed by the warmth of the piss as it course along my head, body to my feet. I reckoned to stimulate the sight, smell and taste in amniotic fluid in a womb according to some medical undergraduates.

Anyhow, as tradition dictated, I was allowed to hug anyone in sight to share the joy of my “re-birth” into adulthood, since I would unlikely be hugged drenched in the male amniotic fluid. The gunners had bolted from the scene almost immediately. They were laughing and taunting as they hastily dispersed and disappeared into the night. They were swift and nimble, for their limbered guns were probably light and of small caliber.

I staggered from the drain, attempted to chase them but managed only to pounce and hug a few unsuspecting souls who cursed cheerfully anyway that night. All was in “piss-full” good mood and fun. Somehow, I limped back to the bathroom to scrub off the amniotic fluid, friendly piss. I survived. No permanent damage from my 21st birthday trauma.

Admittedly, I was one of the luckier ones for 21-gun salute was the mildest sort of birthday celebration conjured at RH. Other birthday celebrations like Flasher, Birthday Suit Swim and Royal Shaves were more creatively notorious and hilariously nasty, and best forgotten.

Looking back, we had loads of fun, and very few nightmares. We were care free, always full of laughter. We celebrated living on all possible occasions, on every excuse or reason. We were creative in pranks and sabotages. Even re-sits were laughed off. Sufferings were taken lightly. We celebrated life. Life was good, actually great at RH.